Much of Paudge’s varied life has been dominated by adventure and travel, marked by periods of stoicism, fortitude and indefatigable physical energy.  Such a life carried with it a fair share of risk, misfortune, lucky escape, brushes with the law, mystery, intrigue as well as moments of wonderful happiness and extreme elation. Thanks to whatever guardian angel he had, his life was steered out of difficult situations to survive for the next adventure; as if to attempt to quell his insatiable untamed free spirit.

Even his conception was something of a miracle that took place on the Blue Train from Paris to the south of France, an event that seemed to seal his fate as an intrepid traveller.  He was born in Dublin of an Irish mother and English father of French Huguenot decent.  Their marriage did not survive long, and Paudge was reared during his first seven years on a Tipperary farm; an idyllic free spirited start to his life. He was then sent to boarding school in England which he hated. He completed his schooling with no great academic results.

After leaving school with no fixed direction or career in mind he spent two years in London working firstly for a year in Inchcape and Co, a shipping company that he was inveigled into through an introduction to the chairman by his grandmother.  He did not like the paper pushing claustrophobic atmosphere of the City, so he resigned and chose to work for a while in a factory as an apprentice with an engineering company.  While in London his first lucky escape happened when he crashed his motor bike into a lorry.  He worked in various small companies until he decided to emigrate to Canada. He failed to pass the interview because he had no skill to offer that country, so then chose Australia that seemed to welcome anyone at the time.

Studying the map of the world it didn’t take any genius to see that there was not much sea to cross between Europe and Australia, so an overland journey looked feasible. In March 1968 he set off hitch hiking from Paris to Istanbul. He finally reached Australia the following May having passed through Asia and the Far East. In Australia and New Zealand he worked in mines and farms. In New Zealand hitch hiking was not without hazard as his lift had a head on collision with another car on the Haast pass. He toured the Orient including Japan and the Philippines which included sailing through a typhoon and travelling illegally in a pirate boat. After two years he decided to return to Europe by almost the same route as the outward journey.

He spent 2 years based in London particularly around the Portobello Road. A hedonistic life experience that was not sustainable and from which he had to escape.  He saved enough money to head to South America via West Africa. Passing through Morocco he had much of his money mysteriously stolen, and had to abandon South America as the final destination. Instead he made a tour of the West African countries passing through countries including Senegal, Mali, Upper Volta (Burkino Faso) Nigeria, and Algeria.  While in Ghana he was named an Alleluia man (a priest) and almost got swept out to sea while trying to walk on water. He returned though the Sahara desert on top of a truck, which was the highlight of the journey. A year later he discovered he had brought back a life threatening parasite, but was saved by the care of the St Charles hospital in London. While recuperating from heavy metal drugs he decided to devote his attentions to working on farms mainly in Hertfordshire, building up enough experience and intent to enter agricultural college. In 1974 he graduated with a National Certificate in Agriculture.  But while at the college he became disenchanted by modern farming methods especially the reliance on chemicals, and wrote his final thesis on organic methods with some help from the Soil Association. At that time very few people recognised the benefits of organic farming, but by luck he found a job on an organic pig/barley farm near St Albans, that was in tune with his philosophy.  He also was interested in self sufficiency so he sold all his vehicles and machinery, and bought a bicycle as his means of transport. He also started learning to play the violin and took lessons under a great teacher in the classical form.

In early 1975 he decided to return to Ireland and embarked on a self study of the Irish language using old Linguaphone 78 records borrowed from the Kensington library. In the summer he left St Albans and cycled back in Ireland, making a bee line for the Irish speaking area of Connemara in order to put what he had learnt into practice. He couldn’t understand anything at all. He made his way to Ring Co Waterford, another Irish speaking area and lived with an old native speaking spalpeen in a derelict house without water or electricity. He worked there milking cows for the remainder of the year while continuing the study of the language.

Disenchanted with the small amount of Irish spoken in Ring he decided to head for the Kerry Gaeltacht. A week before Christmas 1975 he arrived in Baile an Lochaigh on his bicycle to stay with a local family for the festive season. He was not there long before his host offered to sell him a site for a house. He bought a tinker’s barrel roofed caravan and started building a small house single handedly. He remained there permanently for two years practicing a self sufficient life style, including experimentation with windmills to produce electricity. His life became settled and risk free for a while with the only lucky escape being from building his house under high tension electricity wires which might have fried him had he inadvertently touched them. He also suffered a burst appendix but within a few weeks of being discharged from hospital he once again hopped on the bicycle and cycled to Dublin in a day. He became quite fluent in Irish and generally loved and embraced the culture of the area that reminded him of his childhood in Tipperary. Rural life in West Kerry was still the same in many aspects that had been left behind up in Tipperary. People made hay with pitch forks, cut turf and though there were some tractors many people still used horse and cart to take milk to the lorry.

While living in Baile an Lochaigh many people from the city came to study Irish and on  several occasions a friend turned up with his bagpipes. He entered the house in the dead of night and made a dramatic entrance to the small abode. Paudge was so impressed that he had to get a set of pipes for himself and in the autumn of 1978 started his life as an itinerant musician which took him to America, Mexico, Guatemala, Belize, Hong Kong, Japan and Taiwan.  The first visit to America was a whistle stop tour including many cities but gave him a taste for the life as a jet setting musician. In the autumn of the following year after working in Dublin, he cycled from Boston to New Orleans, a wonderful city that became his home away from home every winter for five years.

While in Belize Paudge was knife attacked which left him badly cut and bruised. On his return to New Orleans he took up classes in karate and at the same time started learning Japanese with the view to carrying on his martial studies in Japan.

In June of 1983 Paudge visited Japan for the first time since 1969 and trained for 6 weeks at the tough and ruthless headquarters of the Japan Karate Association. In December of the same year he left America for the last time and spent the winter in Taiwan.  Over the following years he often returned to Japan for additional karate training.

From 1985 he spent five years in London studying woodwork, violin making, and karate funding his studies by busking on the London streets when not arrested for ‘wilfully obstructing the highway’.

In 1990 he returned permanently to Dingle where he set up this business in the craft village, and teaching karate to the youth of West Kerry.

After 13 years of teaching Shotokan karate he was inspired by a Zen Buddhist approach to practicing martial arts. Following a visit by a monk to Dingle he decided to change tack and teach in a new way that drew on the origins of martial arts when they were  originally practiced by monks in China. In 2010 he was invited by the British Shorinji Kempo Federation to join as the only branch in Ireland. He currently holds 3rd Dan in both Shotokan and Shorinji Kempo.

He currently spends most of his time in the craft shop entertaining tourists, learning languages, tending the garden or teaching Shorinji Kempo. Recently he opened the vegetarian café with the vegetables produced from the garden at the rear of the premises. 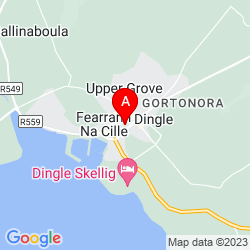